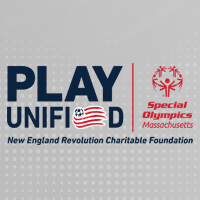 The New England Revolution Charitable Foundation's hallmark annual charity event – Bowl for a Goal presented by Arbella Insurance returns for a fifth year on Wednesday, August 21 from 6:00 to 9:00 p.m. at Splitsville Luxury Lanes in Foxboro, MA.

In addition to the action on the bowling lanes, the event features live music and entertainment. Bowl for a Goal also features a silent auction and raffle with a wide range of experiences and exclusive memorabilia available.

For the first time, we are giving those unable to attend the event an opportunity to participate in the event through an online auction featuring memorabilia from the Revolution and other sports teams.

100% of auction proceeds will be donated to

The 2019 season marks the fifth year of the partnership between the New England Revolution and Special Olympics Massachusetts. Highlighting the partnership is the Revolution’s Special Olympics Unified team, which sees more than a dozen athletes with and without intellectual disabilities sign contracts with the Revolution, interact and train with first-team players, and play in a pair of matches -- away against D.C. United on July 12, and home at Gillette Stadium against New York City FC on September 29.

Since the first Bowl for a Goal fundraiser in 2015, the Revolution have continually raised the bar with donations to Special Olympics Massachusetts exceeding $60,000 annually, including a record $80,000 from last year’s event. The partnership between two organizations extends far beyond the fundraising events, as they have again teamed up for a summer full of events aimed at promoting an environment of inclusivity and friendly competition through the power of sports.