The All 4 the Hall "Songtellers: A Large Intimate Evening" Guitar Auction is now open! The auction will run from May 15 to May 23, 2014, with proceeds going to the Country Music Hall of Fame and Museum in order to support the preservation of country music.

This very special, one-of-a-kind acoustic Ephiphone Dove is adorned with all the benefit concert's participating artists' signatures - certainly something to treasure forever! So, tell your friends, family, community, and let the bidding begin!

About All 4 the Hall

This auction is a part of the Country Music Hall of Fame and Museum’s All 4 the Hall annual fundraiser.  This year’s event took place at Bridgestone Arena in Nashville, TN on May 6, 2014 and presented three hours of one-of-a-kind musical surprises for a sold-out crowd.

The evening’s theme encouraged performers and songwriters to talk about the inspiration behind the songs. The motivation for the hits included heartbreak, headaches, lost love, first dates, cars, breaking the law, spiritual conflict, TV shows, forgetting a potential paramour’s last name, pigs who swim and, more than once, Dolly Parton.

Click here for the event recap and to read the press release. 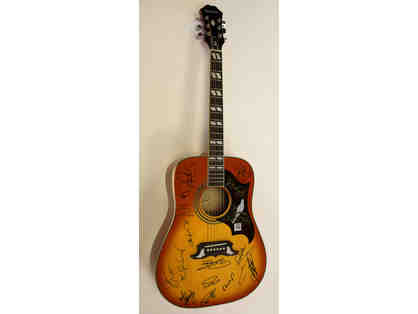