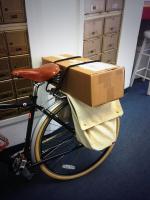 Thank you and goodbye again until next year.

Once the payments are processed this year's item will be making their way to the successful bidders. If you're one of the successful bidders, you'll hear from us by December 13. Thank you to everyone who participated with such wholehearted enthusiasm. If you need to reach the office, call 1.877.422.8404, ext. 10.

(Pictured:FreeMeditationBench.com: Be a meditation co-conspirator!)

The Annual Online Auction: Where Giving and Receiving Meet

We hope that you, like us, found the auction an enjoyable way to support our efforts: every purchase you made benefits the Foundation's ongoing work. Both Buddhadharma: the Practitioner's Quarterly and Mindful magazine are examples of the types of initiative the Shambhala Sun has been able to mount with the assistance of fundraising. The proceeds from this auction will be directed similarly.

We are tremendously grateful to auction donors - the advertisers, contributing artists and writers, and supporters - whose generosity in each of our seven years has allowed us to present this auction.

About the Shambhala Sun Foundation